A sixth-grade teacher at Glenwood Middle School, Jonathan Hart had always looked for a way to keep students engaged over the summer.  In 2008, he combined his career with a passion for gardening and the “Glenwood Gardens” project was born.  It started small, with Hart receiving permission to plant vegetables in an 800 sq. ft. section of dirt (known as The Cove) behind the school.
With just a handful of student volunteers and Hart at the helm Glenwood Gardens produced more than 400 pounds of vegetables that first summer.  It also produced a significant life lesson for the students involved.
“We decided to give our harvest to anyone who had a need for food,” recalls Hart.  “The kids realized just how many families in our own school neighborhood needed help putting food on the table.  They learned how hard work could benefit the community. In 2008 we fed 139 people.”

Added growth in 2009
At the November 2009 meeting of the Findlay City Schools Board of Education, Jonathan and student volunteers, Lisa Kelly, Liz Lonyo and Nathan Balco, gave a review of the program and their hopes to expand it in the future.  Included in the presentation were the following figures from Summer 2009:
• The Lawrence Farm on Route 568 donated an additional 15,200 sq. ft.,
increasing the total garden space to 16,000 sq. ft.
• 5,000 pounds of vegetables were produced
• 1,180 persons in need were fed
• Three adult volunteered and 2,376 volunteer hours were logged in
the gardening effort
During the 2009 growing season, student volunteers often worked two or three hours in the morning, then returned to weed and water in the cooler evening hours.  In addition to learning the benefits of giving, students also learned horticulture along with the principals of physics as they constructed an aqueduct system to bring water in from a nearby creek.  Lisa, Nathan and Liz proudly conducted tours of The Cove during a school cookout in July.
Glenwood Gardens also became a regular vendor at Findlay’s Farmers’ Market, staffed by students each Thursday, with a table of produce and zucchini bread.  Proceeds were returned back to the project to purchase seeds and other supplies.  The kids involved learned about starting a business and the importance of customer service.
As winter winds blow across Glenwood’s schoolyard and the ground lies frozen, Hart is eagerly planning to take Glenwood Gardens to a new level in 2010.  First, he wants to increase the number of people fed to 5,000.  This will require 11,000 pounds of produce; six to eight adult volunteers, and more than 5,000 volunteer hours.  More land has been donated for gardening on County Roads 140, 224, and 53, North Main Street (two city lots) and St. Rt. 12.  With a total predicted garden space of 10-12 acres, the Project needs to be more mechanized.
“Someone has donated a tractor and there’s a possibility we can purchase (another) refurbished one at a good price,” says Hart.  “We’ve received grants from the Community Foundation and ECLIPSE, so we’ve got the cost of tools, seeds and fertilizer covered.”
As the weather warms in 2010, Glenwood Gardens will look to involve more of the community, reaching out to local 4-H clubs, the Findlay High School Environmental Club, and local businesses.  Ultimately, Hart sees the Project as part of a three-fold, holistic care program (food, shelter and employment) aligning with the Bridges Out of Poverty/Ruby Payne framework.  He also sees possibilities for work-study credit for high school students and a way to offset food costs at Findlay City Schools.
Farmers, businesspeople, and educators interested in learning more about Glenwood Gardens, can log on to www.hartsgardens.com, and then click on the “Community Gardening Tab” on the front page. You may also contact Jonathan Hart at Glenwood Middle School, 419-425-8373 or  jhart@findlaycityschools.org 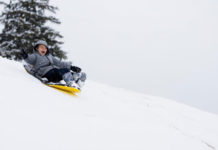