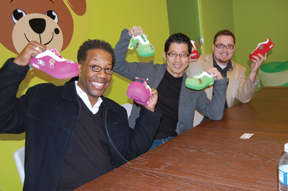 Is it ever a good thing to have something stuck to your shoes? It can be now! Stikii, a fun and unique Toledo-based venture, is looking to give kids something new to wear — and to get stuck on.

Stikiis are shoes — boring, right? That’s what Stikii founder Joe Chew (of Toledo’s Computer Discount) thought, when he took his two children to Target one afternoon. The kids were more than happy to look at toys for as long as Chew would let them. “But when I said ‘Let’s go buy shoes?’” he remembers, “No excitement! I wondered if we couldn’t bring the toy-buying experience to shoes.” Chew was already looking for a way to branch out from the computer business (“I thought ‘If I don’t do something I believe in, I’ll regret it,” he remembers,) and he saw an opportunity. Teaming up with friends Steve Reamey (aka “Gay Steve” of the Morning Show on 100.7 FM) and Tony Martinez, Stikii was born.

The idea was simple — shoes that young kids would be excited about — but the project took a couple of years to develop, looking for designers and suppliers. Finally, a Chinese manufacturer (which has worked with Skecher, among other companies) was happy to do business with the group. And the finished product is every bit as fun as the partners had hoped.

Make it your own

But what’s so special about Stikiis? Ask a seven-year-old. At first glance, they’re just simple, funky, brightly-colored shoes — maybe a more kid-friendly version of Crocs (everyone’s favorite guilty-pleasure footwear). But the joy is in making them your own. The microfiber upper is covered with a hook-and-loop surface (Velcro-style), and young wearers can add as many “Stik-ems” as they want — little cloth or plush icons depicting everything from animals to flowers to robots, that can be moved around, customized, traded with friends — whatever kids like. (Light-up Stik-ems are coming soon!) As Chew envisioned, they make kids’ shoes into something to play with. (The shoes retail at $29.99, with stik-ems prices at $1-2.)

The Stikii gang debuted their product at a kiosk at Westfield Franklin Park Mall in Toledo over the holidays, and hope to get their funky footwear into chain and big box stores soon. Currently, they’re making the rounds of trade shows (with a giant, eye-catching inflatable shoe!) The three founders are confident that they’ve hit on the next big pre-teen fad. So step aside, Silly Bandz — there’s a new Toledo trend that might just stick around.

Stikii’s showroom is at 5844 W. Central, Toledo, next to Radio Shack.

For nearly three decades the Black Swamp Arts Festival has transformed downtown Bowling Green into a hub for art and music and...
Read more