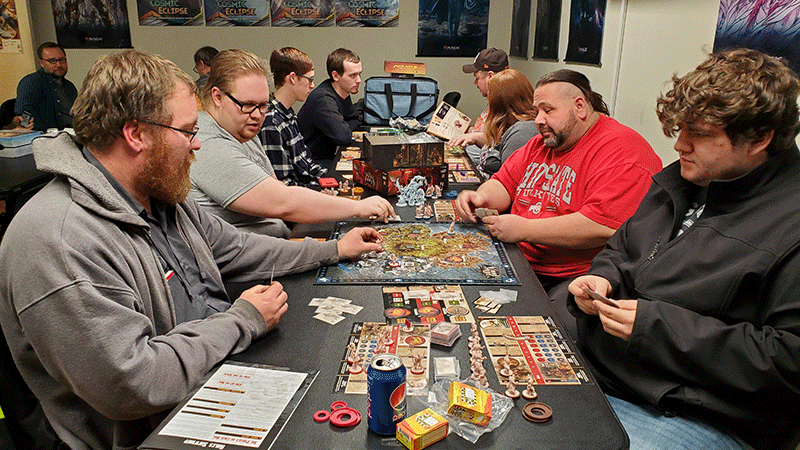 Has your family paused lately to play?

Three local business owners know that “all work and no play” is the wrong formula for success. In fact, their businesses thrive because they believe there are benefits when we all find time to play. Here are some unique spins on “Family Game Night” along with game ideas to make your own gatherings awesome!

At the Hassan Household

Smarty Pants owner Jane Hassan hosts traditional game nights with family, snacks and fun. She gathers together with husband Brian and their teens to play their current game of choice, “YamSlam,” a dice game that is faster-paced than Yahtzee. Hassan’s store at 618 S. Main St., is stocked with enough variety to find a game for families with children of all ages. Top selling during the 2019 holiday season: “Clack!,” $17.99, suited for ages 5+ and “The Game of Space,” $24.99, for ages 14+, but Jane has played it successfully with children as young as seven.

A new game landing on the Hassan table, alongside the popcorn they love at game nights, is the card game “Snapzi,” $9.99. The shelves of “Smarty Pants” display Jane’s passion for making learning enjoyable for all. She is especially excited to offer “Storytime Chess” to Findlay, a specially designed game that allows children as young as 3 to start learning the special traits of Queens, pawns and rooks! Jane says, “It’s incredible!”

In an effort to strengthen the bond among employees, you might not guess that a game called “Superfight” ($29.99 on Amazon) would be effective. However, Findlay’s Heavenly Pizza owner Josh Eichert has found that his employees, who are mainly high school and college students, utilize regular game nights to develop connections with co-workers. From “Monopoly” to grand rounds of “Hide & Seek,” Heavenly Pizza co-workers are able to lay aside their usual duties and, Elchert emphasizes, their cell-phones, to enjoy themselves.

When he’s not working in his 1404 N. Main Street pizza shop, Eichert enjoys game nights with his wife, Keisha, and their 5 children. The entire family is entertained by playing “Sorry” and “UNO,” while the older children have grown to love “Settlers of Catan.” Eichert recommends ordering a Heavenly Pizza “Jumbo” to satisfy those game-playing appetites.

An Invitation to Prioritize Family Play

Gary Hummel’s favorite game-night players are ages 6, 9 and 12 and they refer to him as“uncle.” The owner of Post Board Gaming, 441 E. Sandusky, usually breaks out “Pass the Pandas” to play with his nephew and two nieces. For $12 at the store, you can purchase the game and also receive a plethora of guidance and game supplies.

Post Board Gaming also hosts a variety of game nights open to the Findlay-area community. An event calendar is available on the store website, www.postboardgaming.com. Nearly 100 demo games are available at the store. Hummel also recommends these games to provide fun for adults and kids (age range may vary): “Spot it!”, “Tsuro,” “Roll for It,” “Dungeon Mayhem,” and “Five Minute Dungeon.”

Post Board Gaming” also hosts a variety of game nights that are open to the Findlay-area community.  An event calendar is available on the store website and in a nod to this article, the store is hosting their next “Family Game Day” on Saturday, March 14th, 2020 from 3PM-6PM. The event is free to attend and open to the public. Time will be spent teaching games that Hummel thinks will be good for both parents and for their children, ages 6 and up.  Nearly 100 demo games are available on a regular basis at the store it’s Hummel’s belief that there is something fun for everyone to enjoy.

For nearly three decades the Black Swamp Arts Festival has transformed downtown Bowling Green into a hub for art and music and...
Read more