What Parents Need to Know About The ALICE Training Program 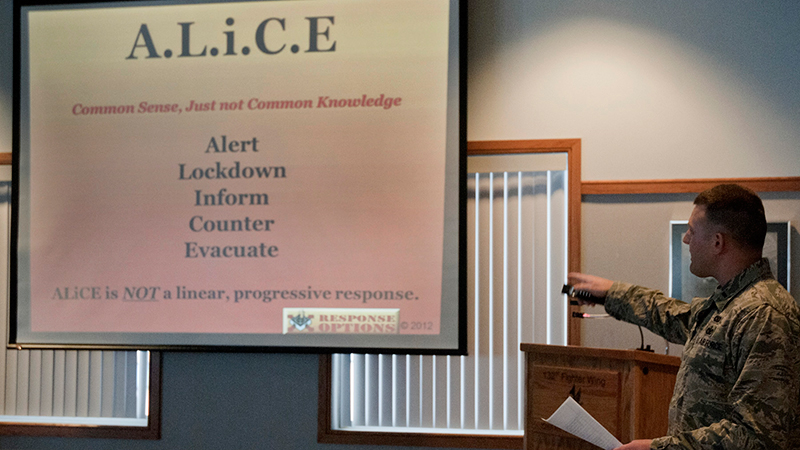 “Barricade the door,” a man shouted.

The people in the room scattered in different directions and then frantically began shoving desks and chairs in front of the door.

Even though this sounds like a scene from the latest Tom Cruise action movie, it wasn’t. Rather it was an ALICE training at my twin teen’s high school. The training was intended for the school staff but will later be available for parents and then for the students. I participated in the two-hour hands-on active shooter simulation which I found both informative and a little scary.

What is the ALICE Training Program?

At the time of the Columbine shootings, Greg Crane worked nearby as a police officer and his wife was a principal at the elementary school. He wanted to help people survive school shootings which led to the creation of ALICE training program. ALICE is an acronym which stands for Alert, Lockdown, Inform, Counter, and Evacuate. The steps do not need to be completed in order.

Alert: Your first notification of danger.

Lockdown: Barricade the room. Prepare to EVACUATE or COUNTER if needed.

Counter: Create Noise, Movement, Distance and Distraction with the intent of reducing the shooter’s ability to shoot accurately. A counter is NOT fighting.

Evacuate: When safe to do so, remove yourself from the danger zone.

The idea behind the program is to be counteractive rather than passive during an active shooter situation.

During the training I attended, the instructor, a police officer, demonstrated the difference between a traditional lockdown and a pro-active plan. A traditional lockdown means turning off the lights and standing in the back of the classroom. When the instructor came into the room pretending to be the active shooter using a nerf gun, he easily hit other people with the nerf pellets.

An ALICE lockdown entails barricading the door using desks, chairs or other furniture and also preventing the door from opening by using belts or similar items to tie around the door handle. When the pretend active shooter attempted to enter the room, he was unable to open the door.

Another aspect of the training uses a distraction to prevent the shooter from hitting his intended target. By throwing books or making noises, ideally the shooter would be diverted and unable to aim his gun.

Currently, about 3,700 U.S. schools, a quarter of all schools, have had ALICE training. Yet some people feel the ALICE training program is controversial. Critics suggest the “counter” method of throwing items may be confusing for younger kids or students with special needs, possibly putting them at risk. Other criticism focuses on how the training is asking kids and teachers to act as a police officer would, yet they have had much more intense training than a few hours. One parent who wrote an article for the Washington Post about the ALICE training stated, “We are foisting so much responsibility on the shoulders of potential victims.”

School officials implement the ALICE program as a way to prevent tragedy by preparing and empowering teachers and students to deal with an active shooter. At this time, the schools that have received the training have not yet dealt with an active shooter so it is unclear if it is an effective method of intervention.

What should parents do?

It is important to discuss school shooting with your teen. Ask them how they feel about lockdown drills or the ALICE training program. You can then reassure them that you and their school are trying to keep them safe. Let them know it is understandable to feel scared or upset.

Even though the training was only a simulation, I felt nervous that I might be hit by the pretend active shooter’s nerf pellets. As I waited, crouching down against the wall in an attempt to make myself invisible, I thought of Noah Pozner. He was a victim of the Sandy Hook shootings, bearing a striking physical resemblance to my son. At the time of his death, they were the same age. They also shared a love for playing Super Mario Bros., and they both had a twin sister. Was Noah crouching against the wall like I was and waiting? How would my son and daughter react during this training or in a real situation?

I also couldn’t help but think it is sad that this training even exists and that my kids have to participate in it. Hopefully, we can work towards some more concrete solutions to prevent school shootings so these types of trainings are no longer necessary.

Cheryl Maguire holds a Master of Counseling Psychology degree. She is married and is the mother of twins and a daughter. Her writing has been published in Parents Magazine, Upworthy, Chicken Soup for the Soul: Count Your Blessings and Your Teen Magazine. You can find her at Twitter @CherylMaguire05

How Should Schools Train For Active Shooters?
https://www.npr.org/sections/ed/2016/12/21/506483959/many-schools-train-staff-to-use-active-responses-to-gunmen

ALICE: This Training Program Could Save Your Child’s Life During An Active Shooter Situation
https://www.scarymommy.com/survive-school-shooting-alice-training/

We’re teaching kids how to fight off an active shooter. Surely we can do better.
https://www.washingtonpost.com/news/parenting/wp/2018/10/02/were-teaching-kids-how-to-fight-off-an-active-shooter-surely-we-can-do-better/?utm_term=.598e0a240d94

An Expert Explains How to Talk to Kids About School Shootings
https://yourteenmag.com/family-life/communication/how-to-talks-to-kids-about-school-shootings